Here are some fun (!) and often frustrating activities that help to demonstrate how our memory works (and doesn’t). 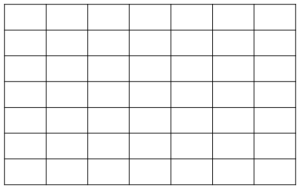 Now, study this grid for 2 minutes, making a mental note of where each letter is located.

Using the grid you prepared in step 1, try and duplicate the completed grid from memory.

How many did you manage to get right?

You might have noticed that the top line spells out EYELINA. If you did, then you employed a strategy known as chunking, that is, you made a meaningful word from the random letters, so instead of the top line representing 7 letters, it now represents one word (useful when our short-term memory only has a capacity of anywhere between 4 and 9 pieces of information.

We could also chunk the following digits.

We’ve now turned 24 number into 6 dates (just as long as we recognise the significance of the dates).

Back to the grid.

You might be surprised to know that some people can recall all 49 letters on the grid and can still recall them 20 years later.

Or perhaps not if you see how it’s done.

Based of the Levels Of Processing model of memory (Craik and Lockhart, 1972).

I would conduct this little experiment with larger classes, but it could be used as a CPD activity. It takes a little bit of preparation.

Make one list simple (for example, mix fewer letters up) and the other more difficult.

Once they’ve finished (condition 2 should take longer), take the answers away from them and surprise them with a recall test.

This is because the difficulty of the anagrams has forced them to process the information more deeply, embedding them more efficiently into memory.

This is a quick an easy way to demonstrate why I would never allow my students to listen to music while they were working.

Pick a random page from a book or supply participants with a written page of text. It’s best if the text is on a topic they are unfamiliar with.

Ask them to read the text to themselves in silence, but repeat Coca-Cola (or any other suitable random word) out loud over and over at the same time – this is called articulatory suppression.

Ask participants to explain the text they have just read.

The component of working memory known as the phonological loop processes auditory information but has a limited capacity, becoming overloaded very easily. It’s unlikely that any of your volunteers will remember very much about what they read.

Much of the early research into working memory conducted by Alan Baddeley and Graham Hitch utilised Verbal Reasoning tasks like the one below.

Complete the following task in your head by deciding if the statement on the left matches the letter arrangement on the right.

Because we have to complete the task in our head, we need to use the dynamic capabilities of working memory in order to hold the information while we manipulate it.

Another way of doing this would be to ask people to count the number of windows in their house by imagining their house. This is a complex process as we are required to retrieve information stored in long-term memory and then manipulate it while it’s in our working memory.

Now, complete this task (don’t forget to repeat the the the).

This second verbal reasining task demonstrates how our working memory can become easily overloaded, preventing us from concentrating on our current task. By insisting that you repeat the words while carrying out the task, I have increased your cognitive load.