Personality is rarely talked about in educational circles and, probably, for good reason. Not only it is a fairly contentious issue (although not quite as contentious as IQ) it also flies in the face or our deep-seated belief that we are in control of our own lives. That doesn’t stop us from completing that personality test we find on Facebook during our lunch break, informing us what Harry Potter character we are or what we would be if we were an animal.

And there are many people who cling to their MBTI personality type.

There’s also the argument that, even if we did know the personality type of every child in our class, would such knowledge make any difference?

This article, therefore, pretty much ignores the usefulness and simply discusses what we know (or what the evidence suggests, if I’m going to be more cautious). That said, I will attempt to offer some advice on circumnavigating the seemingly deterministic nature of these traits.

As always, I’m going to discuss personality in terms of the Big 5 traits.

When we consider the Big 5 personality traits it might seem instinctual to imply that some of these characteristics of selfhood are more useful within academic settings. There is also a bigger question, in that can more academically favourable traits be taught or nurtured?

To recap, the Big 5 (sometimes referred to as the Five Factor Model) suggests that there are five overriding traits (habitual patterns of thought, behaviour and emotion). These are outlined in the table below. 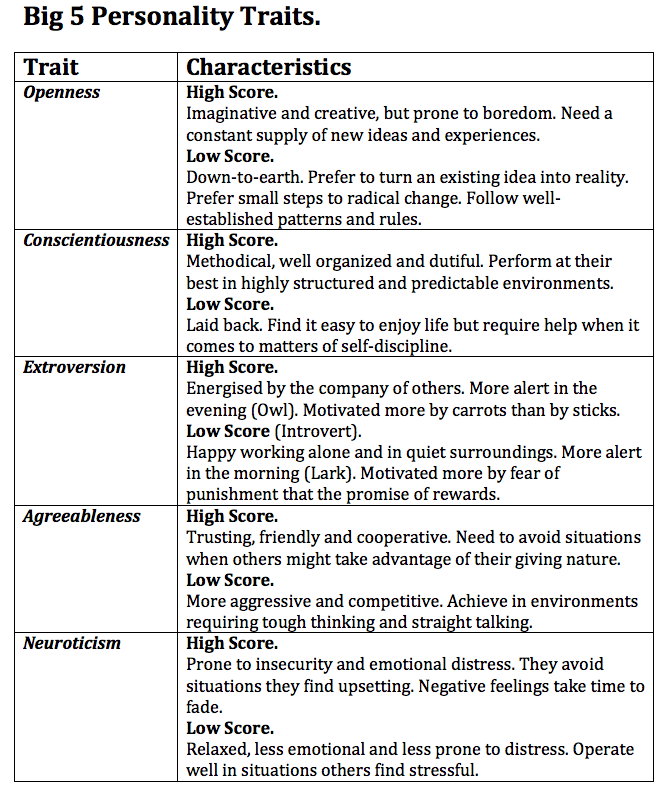 These traits are thought to remain stable over time, although some appear to be more stable than others and recent longitudinal studies have questioned the nature of this stability. There are many reasons for these inconsistencies, including the relatively recent adoption of the Big 5 and other competing models that include a far wider and varied number of traits (Cattel’s model, for example, contains 16). The Big 5, however, is generally considered the industry standard, for want of a better term.

But do these traits really matter? This probably depends on what we consider as useful. There are gender differences in many of these traits (for example, women report higher levels of agreeableness). There also appears to be differences in relation to birth-order, with first-borns being higher in conscientiousness (but these studies are inconsistent). Extroversion is also associated with higher levels of professional success (in terms of earning capacity). Agreeableness is negatively correlated with earning capacity, however, agreeable people are more likely to enter into people-related professions that have a tendency to pay less.

With regards to academic attainment, some traits do seem to be more prevalent in successful students.

Studies consistently find that conscientiousness impacts positively on students Grade Point Average, while openness has also been found to be related to certain types of academic success (for example, verbal SAT scores). Neuroticism (or emotional stability) has been found to impair academic performance in some studies. The relationship between extroversion and academic ability is far less clear, with some studies finding a positive relationship and others a negative one.

Unsurprisingly conscientiousness (a trait more recently rebranded as grit) does appear to be the overriding factor in academic success, while (again) the tendency to worry and stress out (neuroticism) is consistently related to poor academic outcomes.

Does this mean that students simply need to stress less and work harder? Unfortunately, the answer (as always) is rather complicated. Personality traits do remain relatively stable over time, even though recent studies are casting doubt on this. An added problem is that these traits often peak and trough during the adolescent years (as does IQ), displaying inconsistencies both between and within genders (while one trait may rise, another can fall), with one study finding temporal dips in conscientiousness for boys but not girls.

Another possible issue could be the heritability of personality traits. Twin studies have discovered relatively high concordance rates for some traits (most notably, openness to experience and extraversion: 57% and 54% respectively). Conscientiousness was found to be around 50% heritable while neuroticism was slightly lower.

However, a 2015 study using Genome-wide Complex Trait Analysis found heritability rates of 21% for openness and 15% for neuroticism, while the remaining factors were statistically insignificant. This is brand new territory for trait research and we might have to wait some time before further studies are completed.

The problem with personality traits is that no matter how we conform to the trait, there will always be times when we act out of character. We might also conform to type because we assume a particular type of behaviour applies to us (the self-fulfilling prophecy). There is also the danger that we use it as an excuse. I, for example, consistently rate as an introvert (that is, my scores for extroversion are low) and I do often have a tendency to shy away from certain activities by blaming my introversion. That said, I can also naturally display extrovert tendencies in certain circumstances. Does this mean I’m just confused?

Psychologist Brian Little suggests that we all employ so-called free traits as one way of reaching certain goals (he calls such goals personal projects). Free traits are certain characteristics and behaviours that don’t fit our personality type. For example, I’m an introvert but occasionally agree to a public speaking engagement because it helps to fulfil a certain goal or project. This might be a simple goal, such as promote my books or a less tangible one related to my sense of self, worth or personal achievement.

We are, therefore, less bound to these traits than we might think and such characteristics can be employed if we (or our students) have a clear idea of how they can help in the achievement of our goals and completion of our personal projects.

Traits do, therefore, seem to matter but they may not be the straightjacket their name implies.